by Katherina Baranova MD and Matt Cecchini MD FRCPC
May 26, 2022

Mesothelioma is a type of cancer that starts from specialized mesothelial cells. These cells are normally found on the outside surface of the lungs and the intra-abdominal organs such as the colon and small intestine. Another name for mesothelioma is malignant mesothelioma.

Mesothelioma is associated with asbestos exposure in most, but not all cases. Many patients exposed to asbestos will also have areas where their pleura has become abnormally thick. These areas are called pleural plaques and they can usually be seen on imaging of the lungs (x-ray or CT scan). When examined under the microscope, pleural plaques are made up of dense collagen layers that can have a basketweave appearance.

How do pathologists make the diagnosis of mesothelioma?

What other tests may be performed to confirm the diagnosis?

When examined under the microscope, other types of cancer can look very similar to mesothelioma. Most pathologists will perform a test called immunohistochemistry to help them decide if the abnormal cells are mesothelial cells or cells from another part of the body.

When immunohistochemistry is performed, mesothelial cells will typically show the following results:

Pathologists usually require a combination of immunohistochemical tests to help them decide if the abnormal cells are mesothelial cells or if they are from another part of the body.

In order to distinguish between mesothelioma and other conditions, some pathologists may use other immunohistochemical tests including BAP1 and mTAP. Both of these proteins are normally found in tissues throughout the body. However, they are not typically seen in mesothelioma. For that reason, a negative result for BAP1 or mTAP supports the diagnosis of mesothelioma.

What are the types of mesothelioma?

There are three types of mesothelioma based on how the cells look when examined under the microscope. Pathologists decide the type by looking at the size and shape of the cells and the way the cells stick together.

The histologic type is important because patients with the epithelioid type will typically have the best prognosis followed by biphasic then sarcomatoid. The histologic subtype may influence what surgical procedures or therapies are used to treat your specific type of mesothelioma.

A margin is the normal tissue that surrounds a tumour and is removed with the tumour at the time of surgery. If you underwent a complete resection with an extrapleural pneumonectomy, your pathologist will look for tumor cells at the cut edge of the tissue.

What does treatment effect​ mean?

The amount that your tumor responded to therapy may help your oncologist understand how well the tumor is treated by chemotherapy and may be used to help guide further treatment.

How do pathologists determine the pathologic stage for mesothelioma?

​The pathologic stage for mesothelioma is based on the TNM staging system, an internationally recognized system originally created by the American Joint Committee on Cancer. This system uses information about the primary tumour (T), lymph nodes (N), and distant metastatic disease (M) to determine the complete pathologic stage (pTNM). Your pathologist will examine the tissue submitted and give each part a number. In general, a higher number means more advanced disease and a worse prognosis.

Mesothelioma is given a tumour stage between 1 and 4 based on invasion by the tumor into other structures and the resectability of the tumour (the ability to surgically remove). 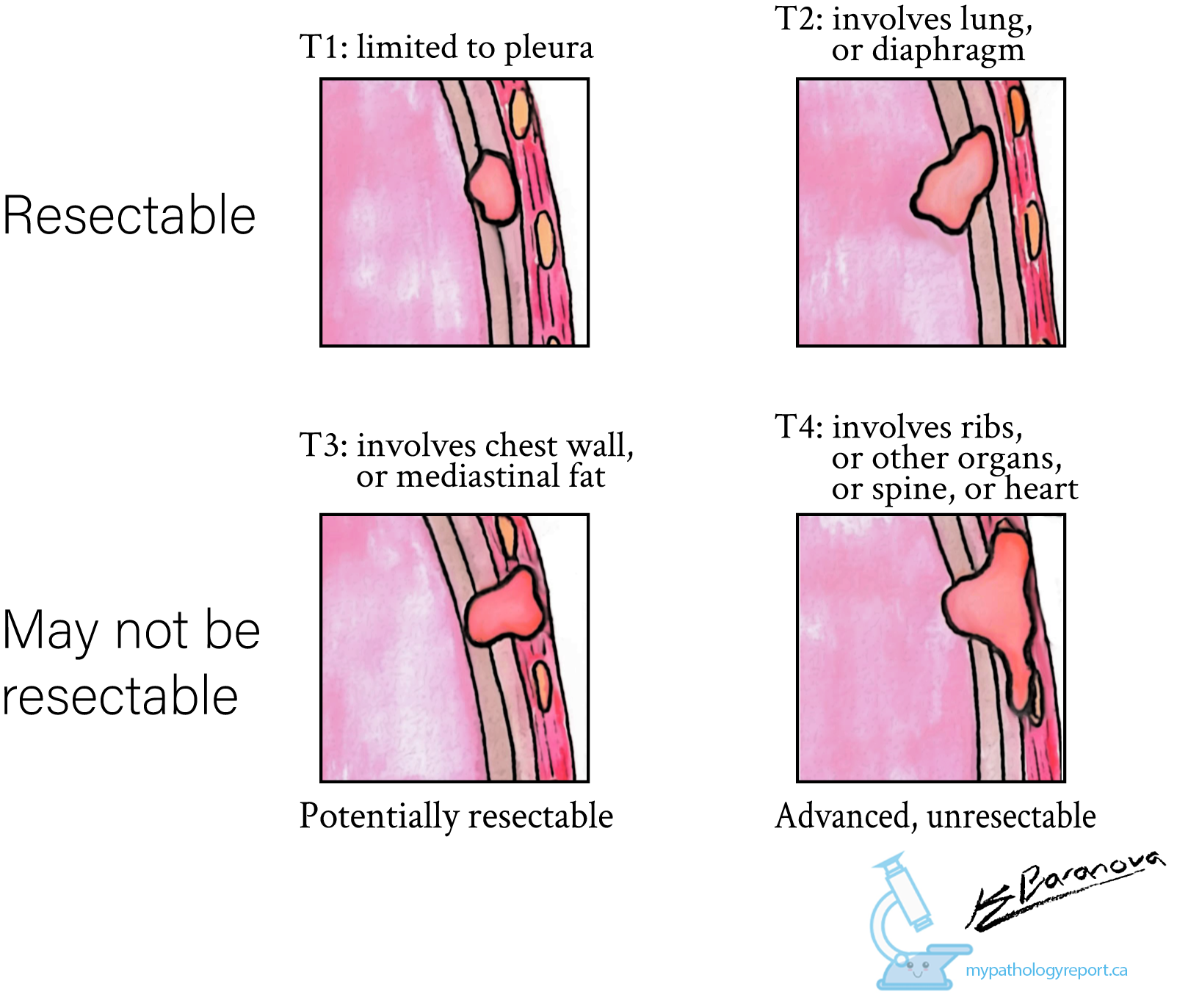 Mesothelioma is given a nodal stage between 0 and 2 based on the presence or absence of tumour cells in a lymph node and the location of the lymph nodes that contain tumour  cells.