Endometrioid carcinoma of the ovary

What is endometrioid carcinoma of the ovary?

How is the diagnosis of endometrioid carcinoma of the ovary made?

For most women, the diagnosis of ovarian endometrioid carcinoma of the ovary is only made when the entire tumour has been surgically removed and sent to a pathologist for examination.

An intraoperative consultation is an opportunity for your surgeon and pathologist to examine the tumour, lymph nodes, or other tissue samples at the time of surgery. During this consultation, a frozen section may be performed where the tissue is quickly examined under the microscope. The purpose of an intraoperative consultation and frozen section is to provide your surgeon with information that will help guide decisions made at the time of surgery.

How do pathologists determine the FIGO grade for endometrioid carcinoma of the ovary?

Pathologists divide endometrioid carcinoma of the ovary into three grades based on the percentage of tumour cells forming round structures called glands. Tumour cells that are not forming glands are described as showing a solid pattern of growth which means there is very little space between the tumour cells. In addition, the grade will be increased by one point if the nucleus (the part of the cell that holds the genetic material) in the majority of tumour cells is very abnormal-looking. Pathologists describe this as severe nuclear atypia. The FIGO grade is important because grade 3 tumours are associated with a worse prognosis compared to lower grade (1 or 2) tumours.

The FIGO grade is important because grade 3 tumours are associated with a worse prognosis compared to lower grade (1 or 2) tumours.

Tumour cells on the surface of the ovary or fallopian tube

The tumour cells in endometrioid carcinoma can spread from the ovary to another nearby organ such as the fallopian tube or the ovary on the other side of the body. If tumour cells are seen on the surface of the fallopian tube or ovary, it suggests that they have travelled there from the tumour. The spread of cells from the tumour to another body site is called metastasis. This information is important because a tumour that has spread or metastasized from one organ to another is given a higher tumour (T) stage (see Pathologic stage below).

This information is important because a capsular surface that ruptures inside the body may spill tumour cells into the abdominal cavity. A ruptured capsule is associated with a worse prognosis and is used to determine the tumour (T) stage (see Pathologic stage below).

Other organs or tissues involved

Small samples of tissue are commonly removed in a procedure called a biopsy to see if tumour cells have spread outside of the ovary. These biopsies, which are often from the peritoneum, are sent to your pathologist to see if the tumour has spread or metastasized. The omentum is an abdominal organ that is a common site of tumour spread or metastasis. This organ is often entirely removed and examined by your pathologist.

Other organs (such as the bladder, small intestine, or large intestine) are not typically removed and sent for pathological examination unless they are directly attached to the tumour or tumour spread to these organs is seen by your surgeon. In these cases, your pathologist will examine each organ under the microscope to see if there are any cancer cells attached to those organs.

The presence of tumour cells in other organs is used to determine the tumour (T) stage and distant metastatic disease (M) stage (see Pathologic stage below).

Lymph nodes are small immune organs located throughout the body. Tumour cells can travel or metastasize from the tumour to a lymph node through lymphatic channels located in and around the tumour.

For endometrioid carcinoma of the ovary, pathologists divide lymph nodes with tumour cells into three categories:

If the DNA becomes damaged or if it cannot be read accurately, the cell will be unable to produce normal proteins and the cell may not function normally. An area of damaged DNA is called a mutation and mutations are one of the most common causes of cancer in humans.

In most tumours, mismatch repair deficiency is somatic, which means the mutation is only present in your tumour cells. Somatic mutations can result from both environmental and complex genetic factors, and it is very difficult to determine the exact reason why the mismatch repair protein stopped working properly.

Pathologic stage for endometrioid carcinoma of the ovary

​The pathologic stage for ovarian endometrioid carcinoma of the ovary is based on the TNM staging system, an internationally recognized system originally created by the American Joint Committee on Cancer. This system uses information about the primary tumour (T), lymph nodes (N), and distant metastatic disease (M)  to determine the complete pathologic stage (pTNM). Your pathologist will examine the tissue submitted and give each part a number. In general, a higher number means more advanced disease and a worse prognosis. 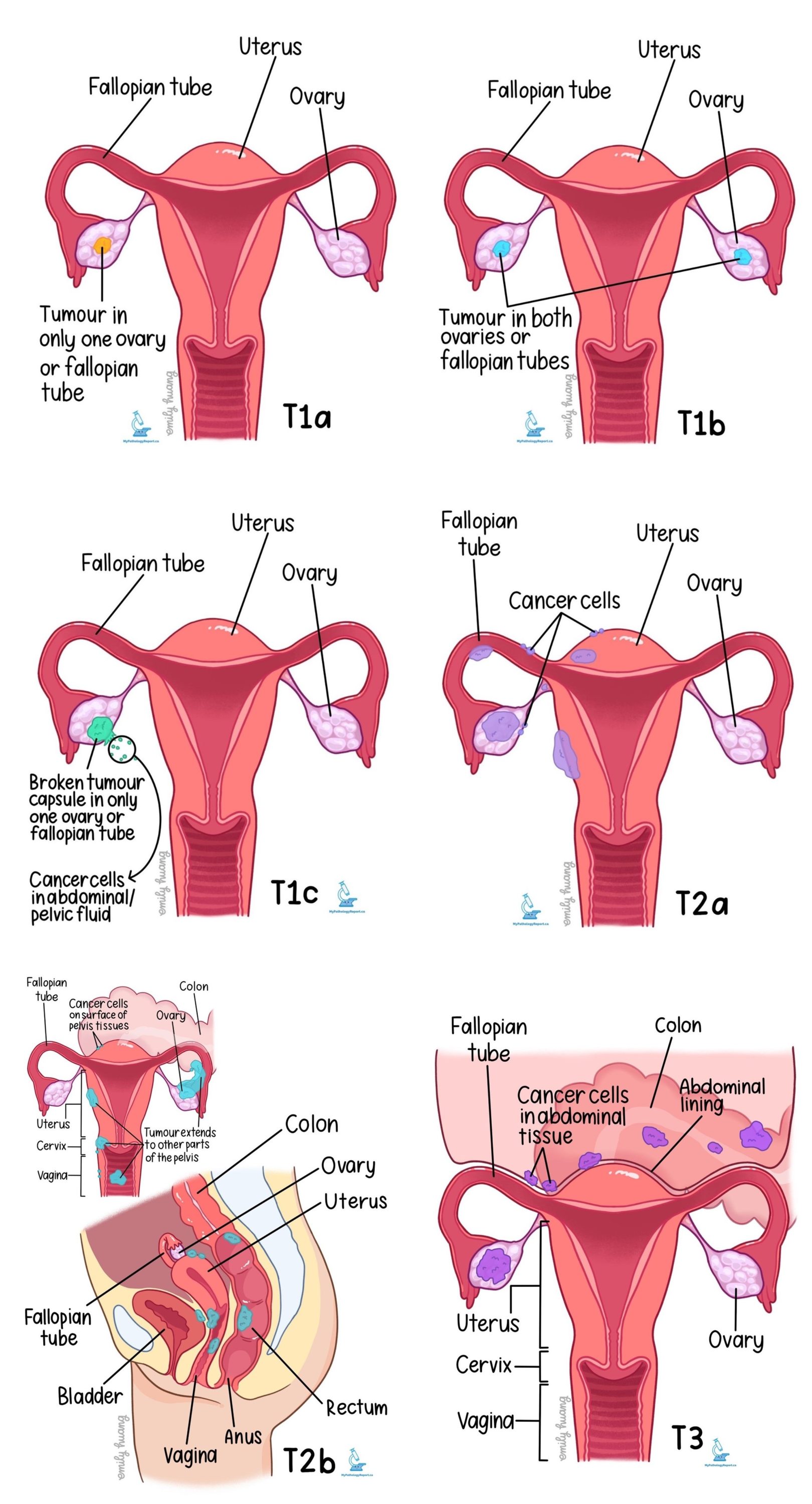 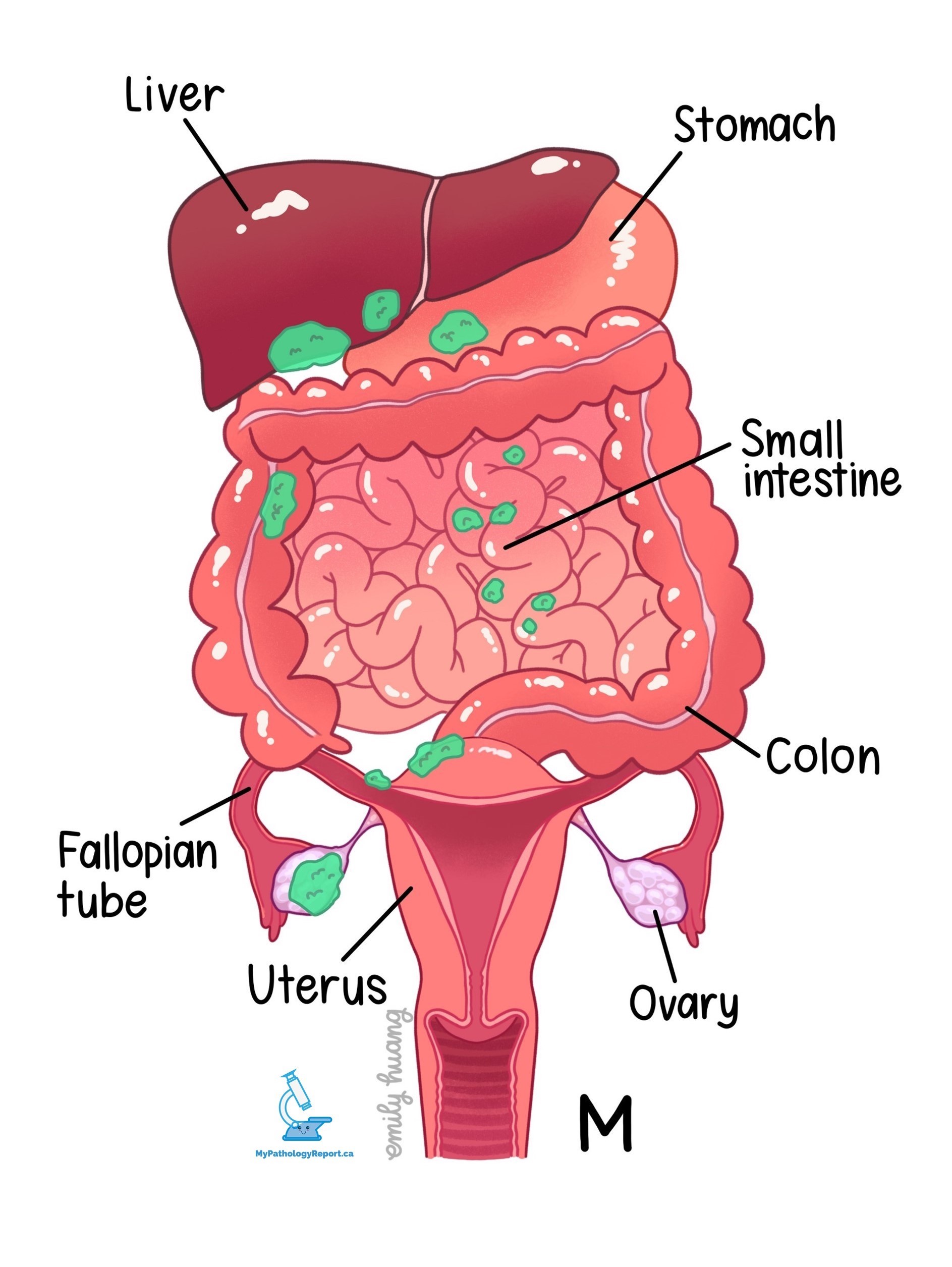