This article will help you understand anemia and laboratory tests used to make this diagnosis.

The blood contains many different types of cells. These cells include immune cells and red blood cells (RBCs). RBCs are responsible for carrying oxygen from your lungs to the rest of your body and carrying carbon dioxide back to the lungs. They hold on to oxygen and carbon dioxide using a specialized protein called hemoglobin.

Red blood cells are made in a part of the bone called the bone marrow. As young RBCs mature in the bone marrow, they produce hemoglobin. Your body needs iron in order to make hemoglobin for RBCs. Once this process is complete, the RBCs are released into the blood stream. Normal, healthy RBCs circulate in the blood stream for about 120 days before they are removed, and their iron recycled to make new RBCs.

Anemia can be caused by anything that decreases the number of RBCs in your blood or the amount of hemoglobin found in each RBC. In some situations, a person may have more than one reason for developing anemia.

The causes of anemia are often divided into three groups:

Iron deficiency anemia is a type of anemia caused by low levels of iron in the body. It is the most common cause of anemia.

Under normal conditions, the body gets all of the iron it needs to make new RBCs from a combination of recycled iron (from RBCs after they die) and iron from the diet. The amount of iron in the body is carefully controlled. A specialized protein called transferrin is used to carry iron from recycled RBCs and absorbed in the small intestine to areas of the body where iron is needed.

If iron levels in the body are low, new iron can be released from food in the stomach and then absorbed in the intestine. Any condition that causes the body to lose RBCs or reduces the amount of new iron absorbed from food can lead to iron deficiency.

The most common reasons for developing iron deficiency are:

When iron levels are low, the immature RBCs are unable to make enough hemoglobin. As a result, the new RBCs will be smaller (microcytic) and more pale (hypochromic) than normal RBCs (see picture below). The cells also tend to vary in shape compared to normal RBCs that are more uniform. These changes take time to develop and may not be seen at the early stages of iron deficiency.

How do doctors test for iron deficiency?

A blood test is the most common way to test for iron deficiency. The blood test will measure both the amount of iron in your blood and the proteins that regulate iron levels.

Iron deficiency can also be diagnosed after a small sample of bone marrow is removed in a procedure called a bone marrow aspirate. The tissue sample is then examined under a microscope by a pathologist using special stains to look at the amount of iron in the tissue sample. Usually this is not necessary to make the diagnosis since the blood tests can provide an answer

Anemia can also be caused by conditions that indirectly affect the development of RBCs. The conditions that commonly result in anemia include chronic inflammatory diseases, long-standing infections (such as HIV or tuberculosis), kidney disease, and cancer.

How do these conditions cause anemia?

Chronic inflammation can also cause anemia by reducing the amount of new iron absorbed from food or how it can be used by the body.

How do doctors test for anemia of chronic disease?

A blood test can be used to test for anemia of chronic disease.  When examined under the microscope the RBCs usually have a normal size (normocytic), although in some cases they can be smaller than normal (microcytic). The level of ferritin in the blood will be normal or increased, even if the iron stores are decreased. The other iron tests will help determine if there is also iron deficiency, as both anemia of chronic disease and anemia of iron deficiency can happen at the same time.

Low levels of vitamin B12 or folate prevent RBCs from producing a normal amount of genetic material. This causes the RBC to become abnormally large and have abnormal nuclei. Pathologists call these cells megaloblastic. Other specialized immune cells called neutrophils are often also affected.

The diagnosis is usually made after blood work shows anemia with large RBCs (macrocytic) or abnormal neutrophils. Additional blood tests will reveal the low levels of vitamin B12, or more rarely low levels of folate.

Vitamin B12 is found in food that comes from animals. The stomach produces a protein called intrinsic factor, a substance that helps the body absorb vitamin B12 in the small intestine. This process also requires substances made by the by the pancreas. Once absorbed, vitamin B12 is stored in the liver.

Low levels of vitamin B12 can be caused by a lack of vitamin B12 in the diet (for example, a vegan diet without supplementation), diseases involving the stomach, pancreas, or small intestine, and certain medications. Pernicious anemia is a special type of megaloblastic anemia caused by low levels of intrinsic factor, either because it cannot be produced properly or because antibodies destroy it.

Folate is a word that describes a group of essential vitamins. Folic acid is a form of folate found in supplements. Folates are found in fruits and vegetables and are absorbed in the small intestine. Low levels of folate can be caused by a lack of folate in the diet, diseases that prevent absorption in the small intestine, and certain medications. Women that are pregnant or breastfeeding require additional folate and it is recommended that they take supplements. Folate deficiency is rare in developed countries where folate is commonly added to flour.

Hemolytic anemia is a type of anemia caused by conditions that damage or destroy RBCs before they reach the end of their 120-day life span. In response, the bone marrow will increase production of new RBCs, but it may not be sufficient to make up for the loss. The result is a decreased number of normal, healthy RBCs in the blood.

Conditions that cause hemolytic anemia can be divided into two categories: immune causes and non-immune causes. Each category includes a number of different diseases and only the most common in each category will be described below.

In immune hemolysis, the body produces antibodies that recognize and stick to RBCs. Immune cells see the antibody-covered RBCs and attack them. RBCs damaged in this attack will be either removed in the spleen or liver or destroyed in the blood. Conditions that can cause immune hemolysis include autoimmune diseases such as lupus, blood cancers such as non-Hodgkin’s lymphoma, and chronic infections such as HIV and tuberculosis. 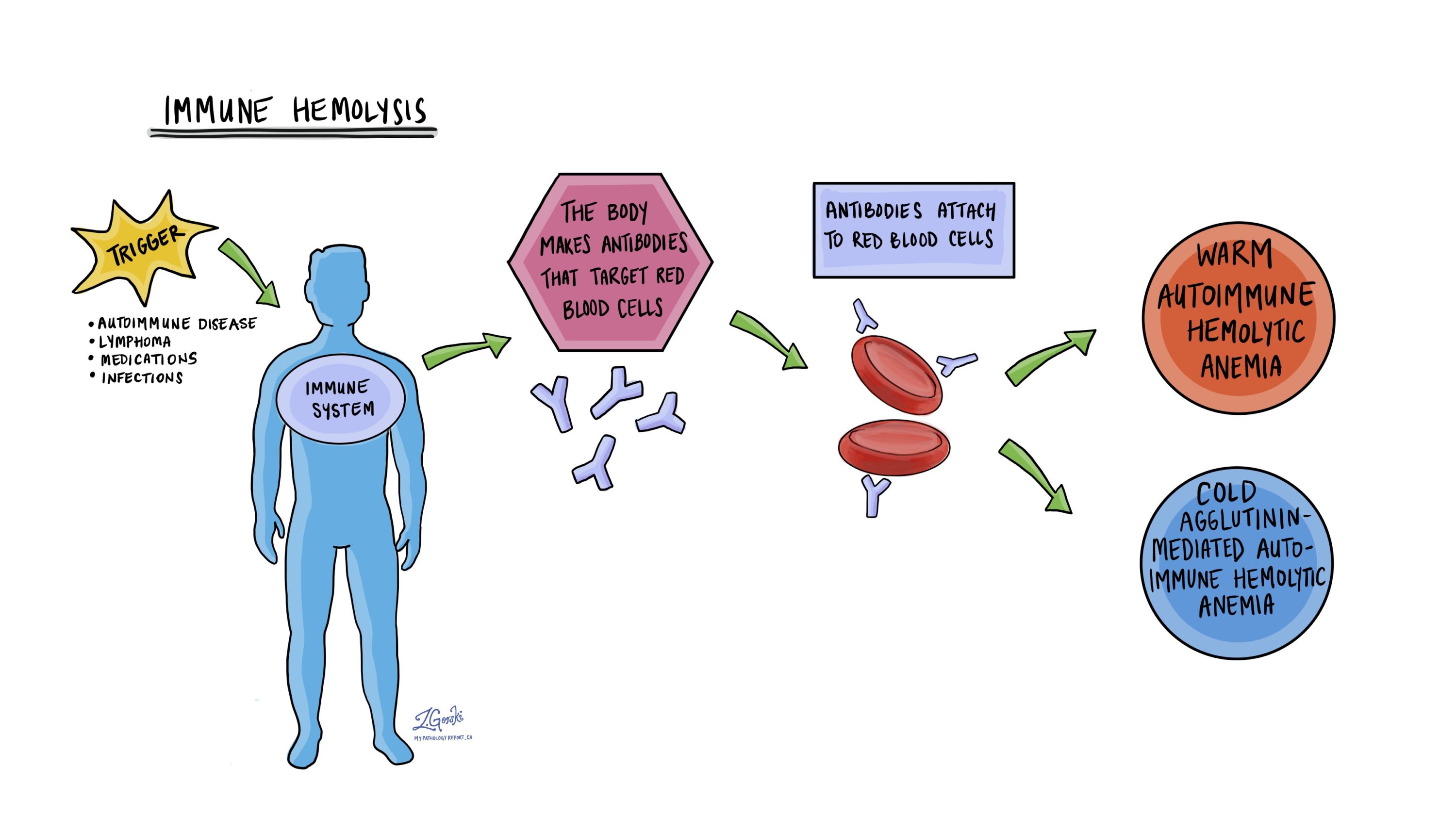 Autoimmune hemolysis can be caused by the immune system damaging a normal part of the body. This is called an autoimmune reaction. Similarly, the antibodies that stick to RBCs can be called autoantibodies. 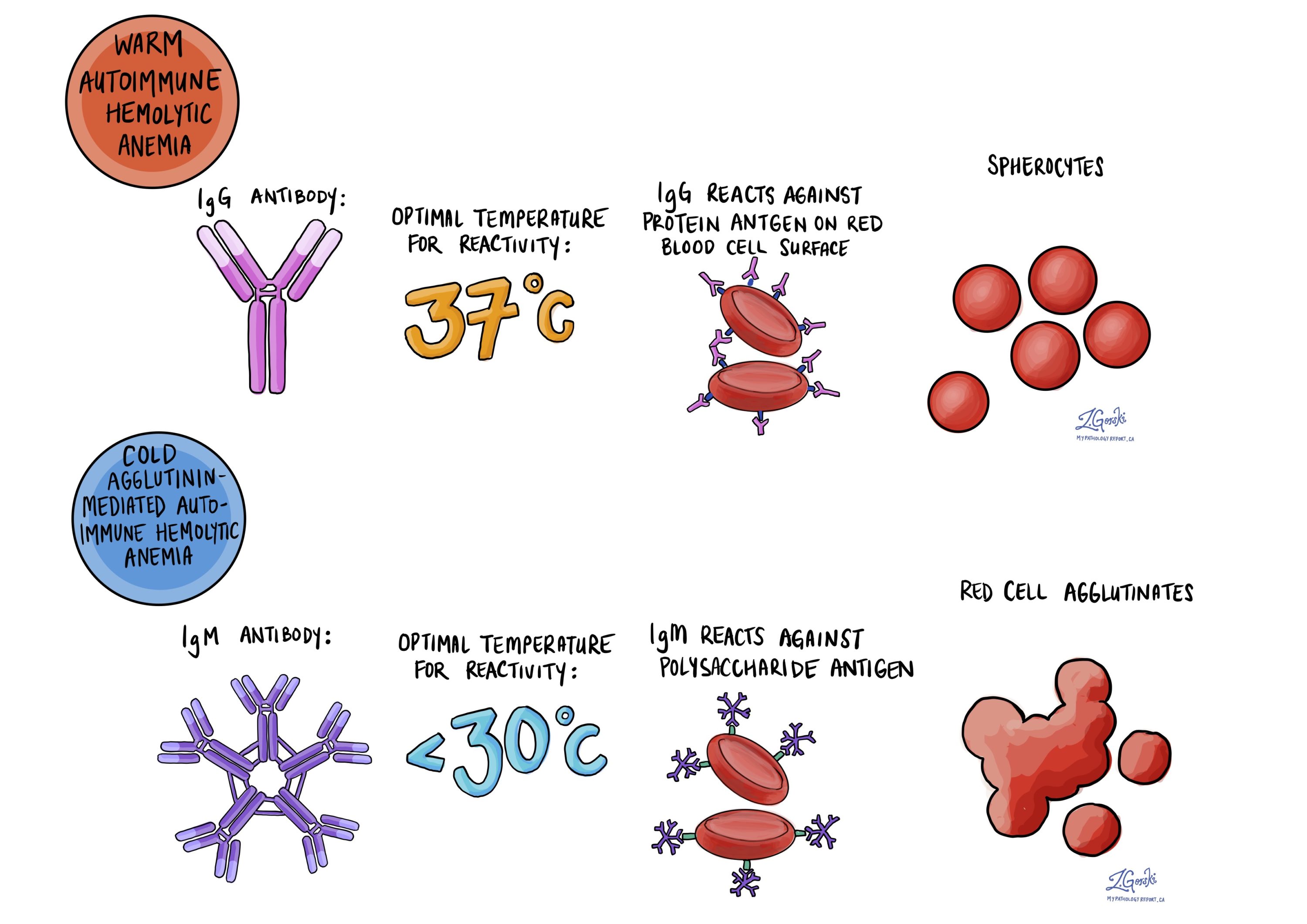 A disease called paroxysmal cold hemoglobinuria that mostly happens in children after an infection is also due to a special type of antibody that sticks to RBCs in colder temperatures of the extremities and will activate the immune system when it comes back to warmer areas of the body.

There are many conditions that can lead to autoimmune hemolysis including lymphoma, infections (in particular HIV, Mycoplasma pneumoniae), and certain medications. Other autoimmune disease such as systemic lupus erythematosus can also result in the production of antibodies against RBCs and immune hemolysis.

Immune hemolysis can also be caused when proteins not normally found in the body enter the blood stream. Once detected by the body, the foreign proteins trigger an alloimmune reaction (“allo” means other).

An alloimmune reaction can occur when a baby inherits blood proteins (RhD or ABO) from the father that are different from the mother. An alloimmune reaction can also occur when a person receives a blood transfusion that is not compatible with their own blood group. Fortunately, both of these situations are now rare thanks to preventative medications and strict testing.

How do doctors test for immune hemolysis?

Other blood tests can look for substances released from damaged RBCs such as indirect bilirubin and lactate dehydrogenase (LDH). A specialized protein called haptoglobin may also be measured. Haptoglobin sticks to free hemoglobin in the blood to remove it. Because the amount of free hemoglobin in the blood goes up when RBCs are damaged or destroyed inside the vessels, intravascular hemolysis causes the level of haptoglobin to go down.

When a blood sample is examined under the microscope, your pathologist may see an increased number of young (immature) RBCs. Immature RBCs are larger and more purple in color, while very immature RBCs still have a nucleus. A type of RBC called spherocyte, which is very round and darker than normal RBCs can also be seen.

There are conditions that lead to destruction of RBCs without the intervention of autoantibodies or alloantibodies. For example, RBCs can be damaged or destroyed by physical forces acting on the RBCs as they travel through the blood stream The group of diseases that cause anemia in this manner are called thrombotic microangiopathy (TMA) or microangiopathic hemolytic anemia.

Diseases in this group include:

Conditions that can lead to uncontrolled formation of blood clots and TMA include infections, cancer, certain types of medications, pregnancy, organ transplantation, or trauma.

How do doctors test for thrombotic microangiopathy?

As with immune hemolysis, blood tests can be performed to look for substances released from damaged RBCs such as indirect bilirubin and LDH. There will also be a decrease in haptoglobin. Depending on the type of TMA, tests that measure substances involved in blot clot formation may also be abnormal. There are also tests that can help determine if other organs are affected, such as the kidneys.

When a blood sample is examined under the microscope, small fragments of damaged RBCs, or schistocytes, can be seen. There will also be an increased number of immature RBCs and a decreased number of platelets.