What is oncocytoma of the kidney?

Oncocytoma is a non-cancerous kidney tumour. The tumour is made up of large pink cells called oncocytes.

What are the symptoms of an oncocytoma in the kidney?

Most oncocytomas do not cause any symptoms and are discovered incidentally (by accident) when imaging such as an MRI or CT of the abdomen is performed for another reason. Occasionally, large tumours can cause pain in the back or side of the body or bloody urine.

What causes an oncocytoma in the kidney?

At present, doctors do not know what causes most oncocytomas. However, people with the genetic syndrome Birt-Hogg-Dube are at a higher risk of developing this kind of tumour.

What if more than one oncocytoma is found in the same kidney?

It is possible for more than one oncocytoma to develop in the same kidney. This is called oncocytosis. Even though more than one tumour was found, the condition is still considered non-cancerous.

How is the diagnosis of oncocytoma made?

The diagnosis is usually made after the entire tumour is surgically removed and sent to a pathologist for examination under a microscope.

In pathology, a margin is the edge of a tissue that is cut when removing a tumour from the body. The margins described in a pathology report are very important because they tell you if the entire tumour was removed or if some of the tumour was left behind. The margin status will determine what (if any) additional treatment you may require.

Most pathology reports only describe margins after a surgical procedure called an excision or resection has been performed for the purpose of removing the entire tumour. For this reason, margins are not usually described after a procedure called a biopsy is performed for the purpose of removing only part of the tumour. The number of margins described in a pathology report depends on the types of tissues removed and the location of the tumour. The size of the margin (the amount of normal tissue between the tumour and the cut edge) depends on the type of tumour being removed and the location of the tumour.

A positive (or very close) margin is important because it means that tumour cells may have been left behind in your body when the tumour was surgically removed. For this reason, patients who have a positive margin may be offered another surgery to remove the rest of the tumour or radiation therapy to the area of the body with the positive margin. The decision to offer additional treatment and the type of treatment options offered will depend on a variety of factors including the type of tumour removed and the area of the body involved. For example, additional treatment may not be necessary for a benign (non-cancerous) type of tumour but may be strongly advised for a malignant (cancerous) type of tumour. 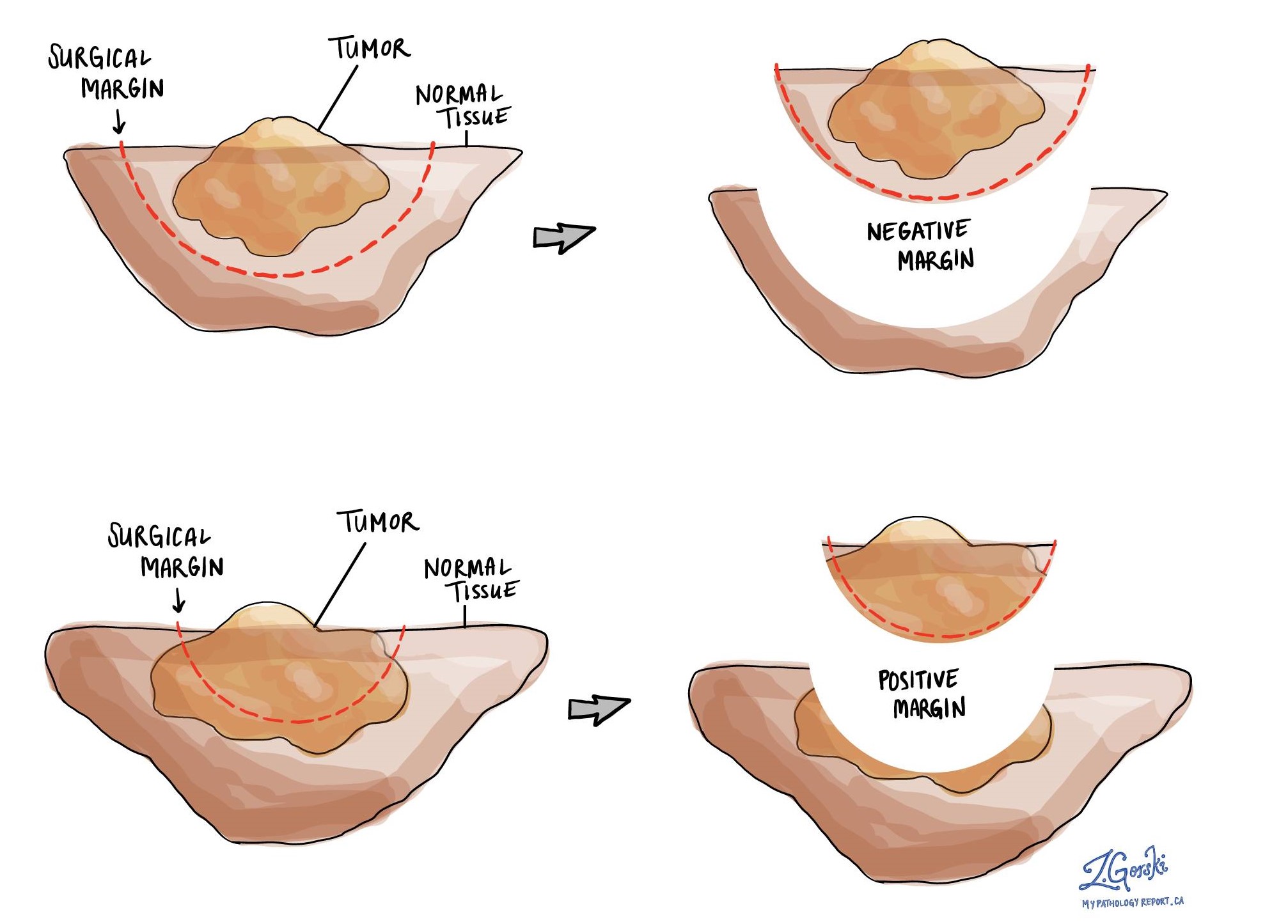