Fibrocystic change of the breast

This article will help you read and understand your pathology report for fibrocystic change of the breast.

The anatomy of the breast

Adult breast tissue is made up of small structures called glands which are organized into groups called lobules. Under certain conditions, these glands can produce milk, which is transported to the nipple by a series of small channels called ducts.

In normal, healthy breast tissue, the ducts and glands are lined by a single layer of epithelial cells. Pathologists describe these cells as cuboidal because each cell is as tall as it is wide (like a square). 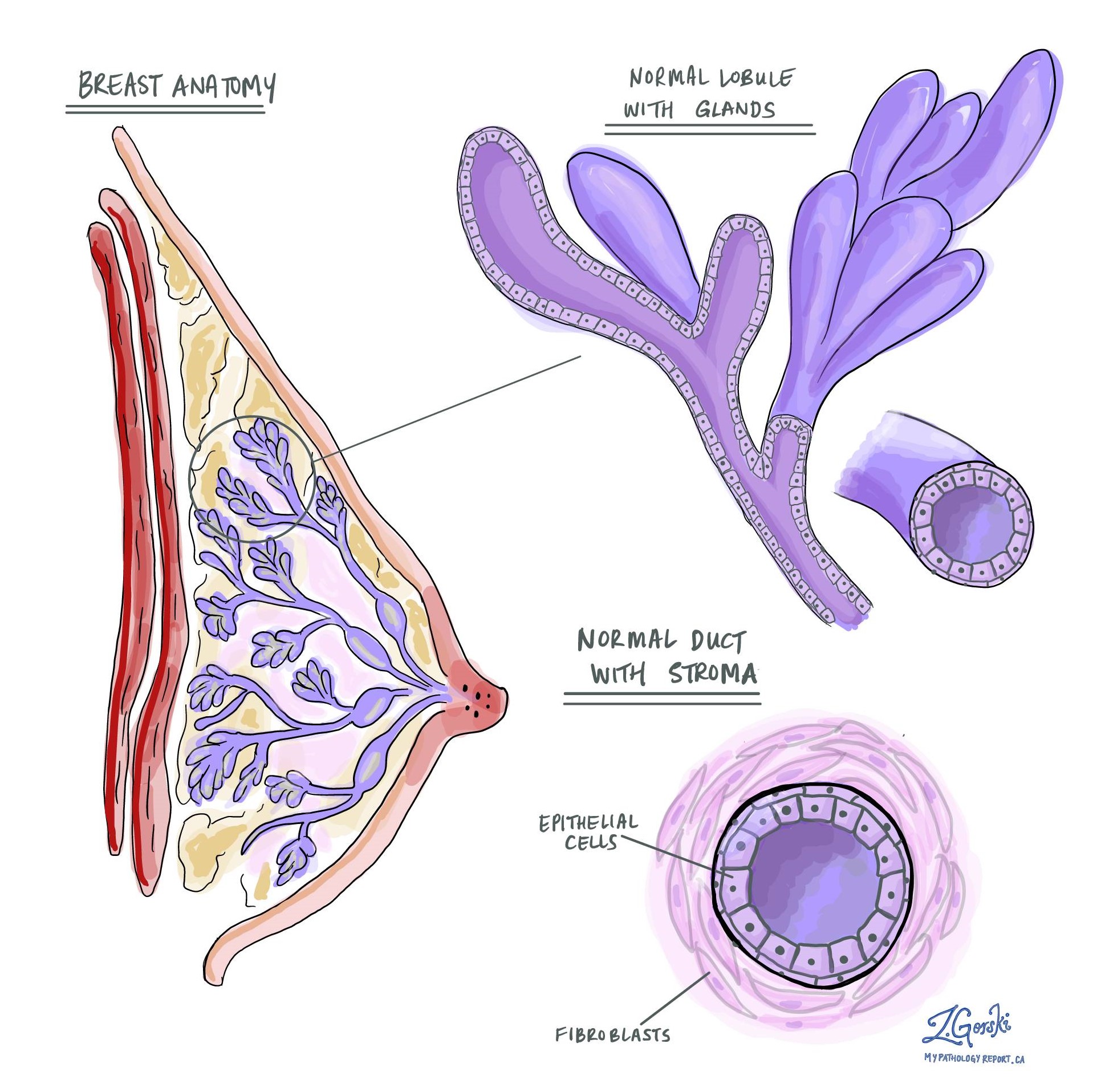 What is fibrocystic change?

Fibrocystic change (FCC) is a general term used for non-cancerous breast changes that often develop together in the breast. It is a common finding seen in up to 60% of reproductive aged women. FCC are believed to develop in response to stimulation from hormones such as estrogen and progesterone.

The diagnosis fibrocystic change is used in a pathology report to describe a groups of non-cancerous changes. These changes can only be seen after the tissue is examined under the microscope by a pathologist. 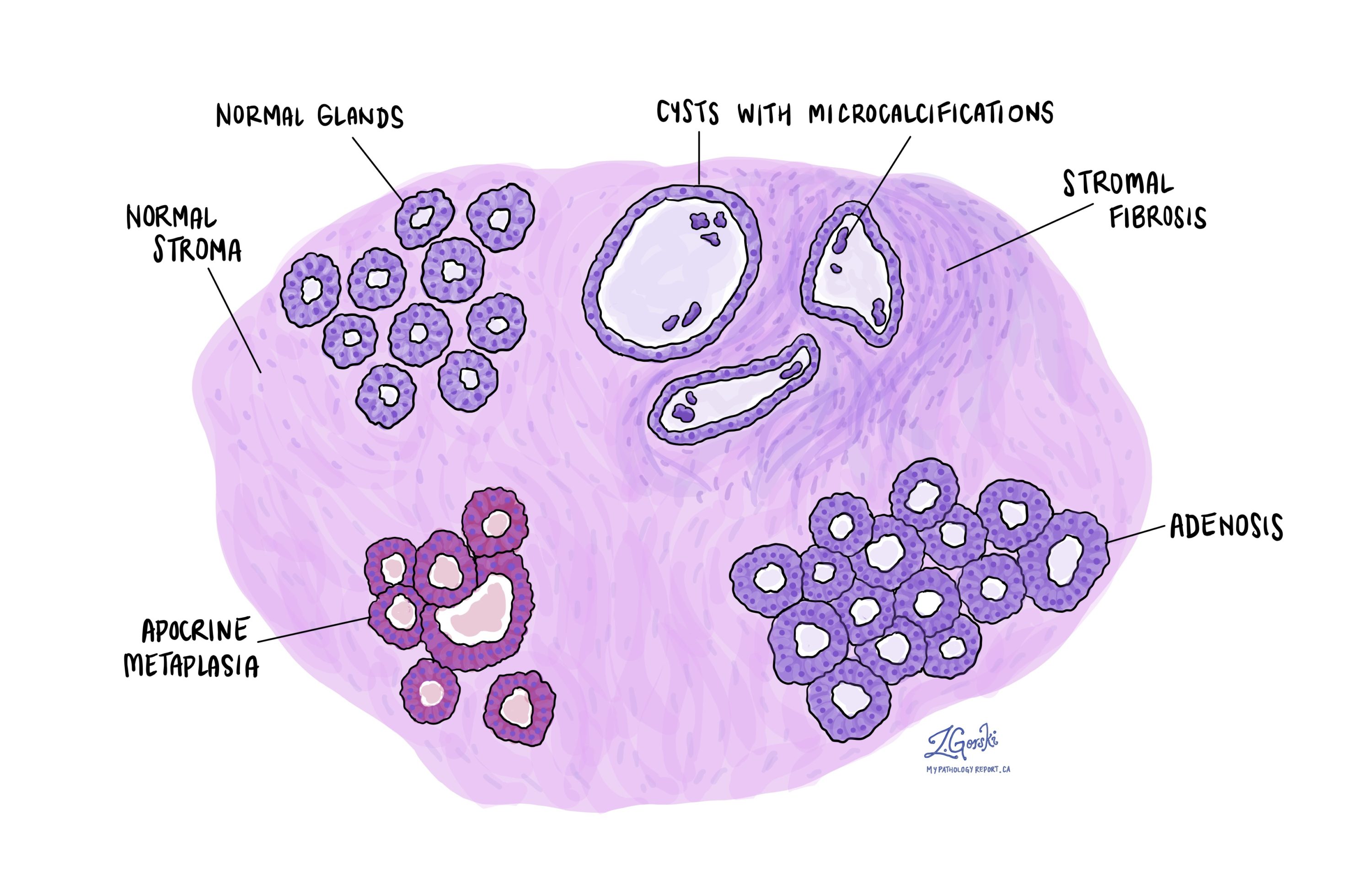 Normal glands in the breast are small, round structures that often look empty when examined under the microscope. A cyst is a enlarged, fluid filled gland. These cysts can be single or numerous and may be varied in size.

When groups of cysts or single cysts become large enough, they can be felt when the breast is examined. Over time, some of the calcium in the fluid is left in the tissue where it creates calcifications. These large cysts and calcifications can be seen as abnormalities on ultrasound or mammography.

If a cyst breaks, the fluid inside will spill into the surrounding stroma. This can cause inflammation and the creation of new stromal fibroblasts. Overtime this reaction can create a scar that pathologists describe as fibrosis.

Metaplasia is a word that pathologists use to describe a change from the normal cell type to another cell type. It is a non-cancerous type of change. In apocrine metaplasia, the epithelial cells lining the breast ducts change from columnar cells to apocrine cells. Apocrine cells are easy to see under the microscope because they are larger than normal cells and the body of the cell (the cytoplasm) is bright pink.

Adenosis means an increased number of glands in the breast. It is also a non-cancerous change. The new glands may be larger than the normal glands and some may contain fluid. Adenosis is often seen together with columnar cell change and columnar cell hyperplasia.

Is this condition associated with an increased risk for cancer?

Fibrocystic changes are not associated with an increased risk for developing breast cancer.

The diagnosis of fibrocystic change can be made after a small sample of tissue is removed from the breast in a procedure called a core needle biopsy. The biopsy may be performed after densities or calcifications were seen on mammography.

Fibrocystic change can also be seen in tissue removed to diagnose or treat a cancer or other non-cancerous condition in the same breast.