An osteoblastoma is a relatively rare non-cancerous bone type of bone tumour. These tumours usually range in size from about 2 to 5 cm but they can be much larger, up to 20 cm. They are most frequently found in the bones of the legs, feet, and spine, but other locations are possible. A tumour that looks very similar to osteoblastoma but measures less than 2 cm is called an osteoid osteoma.

This type of tumour generally occurs in children and young adults but can occasionally occur in older adults. The most common symptom is pain, but other symptoms include swelling, decreased range of motion (for example, not being able to move your leg, arm or back as much as normal), and numbness and tingling depending on the location of the tumour.

Normal bones develop when specialized cells called osteoblasts produce a substance called osteoid. Osteoid is initially soft but becomes hard over time as minerals (such as calcium) are added to it. Osteoid that is still soft is called ‘immature’ bone while mineralized, hard osteoid is called ‘mature’ bone. The immature bone starts out with a woven, disorganized appearance under the microscope before undergoing mineralization and remodelling, which makes it hard and strong. 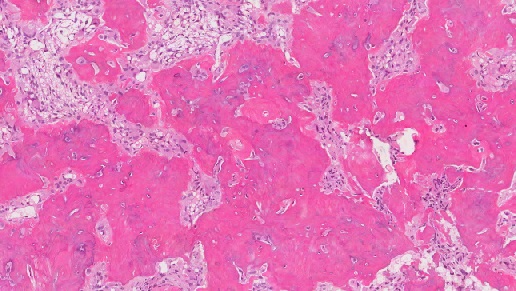 In addition, osteoblastoma usually shows a clear border between the tumour tissue and the normal bone, a feature that can be seen by both X-ray or other imaging and under the microscope. For this reason, your pathologist may also look at your X-ray results before making the diagnosis of osteoblastoma.