This article will help you read and understand your pathology report for dysplastic nevus of the skin.

The anatomy of skin

Your skin is the largest organ in your body. It is made up of three layers: epidermis, dermis, and subcutaneous fat. The surface and the part you can see when you look at your skin is called the epidermis. The cells that make up the epidermis include squamous cells, basal cells, melanocytes, Merkel cells, and cells of the immune system. The squamous cells in the epidermis produce a material called keratin which makes the skin waterproof and strong and protects us from toxins and injuries.

Melanocytes are specialized cells that are normally found at the very bottom of the epidermis. They are responsible for producing a dark pigment called melanin that helps protect our skin from the sun’s ultraviolet light. The amount of melanin in a person’s skin determines their skin colour – people with light skin produce little melanin and people with darker skin produce more melanin.

What is a dysplastic nevus?

A dysplastic nevus is a non-cancerous type of growth made up of melanocytes. Although it is considered non-cancerous, some can turn into a type of cancer called melanoma over time.

Another name for this type of growth is mole. Mole is common term used to describe any kind of growth made up of melanocytes.

Dysplastic nevi are usually seen in individuals of lighter skin complexion and are typically found on the abdomen, upper back and shoulders, scalp, breasts, and buttocks. Most dysplastic nevi develop later in life, usually in adulthood.  The risk of developing melanoma is higher for people with more than one dysplastic nevus.

What does a dysplastic nevus look like when examined without a microscope?

Most dysplastic nevi are flat, and they can show a variety of colours including black, brown, red, and blue. The border between the dysplastic nevus and the surrounding skin is uneven which can make it hard to tell where the nevus ends, and the normal skin begins.

When examined without a microscope, a dysplastic nevus can look similar to a melanoma. For that reason, your doctor may suggest removing the growth so that it can be examined by a pathologist under the microscope.

How do pathologists make the diagnosis of dysplastic nevus?

This diagnosis can only be made after a tissue sample is removed and examined under the microscope by a pathologist. This usually involves removing the entire nevus in one piece along with a small amount of surrounding normal appearing skin.

How is a dysplastic nevus different from an ordinary (non-dysplastic) nevus?

A dysplastic nevus shares many features with an ordinary or non-dysplastic nevus. Both are made up of melanocytes and both can be junctional or compound. However, there are specific microscopic features that make a dysplastic nevus different and more concerning. Pathologists divide these features into two categories: architectural and cytologic.

Architecture describe how the cells in the nevus connect together and how the tissue around the cells is responding to the growth. At least some of these architectural features will be found in order to make the diagnosis of dysplastic nevus: 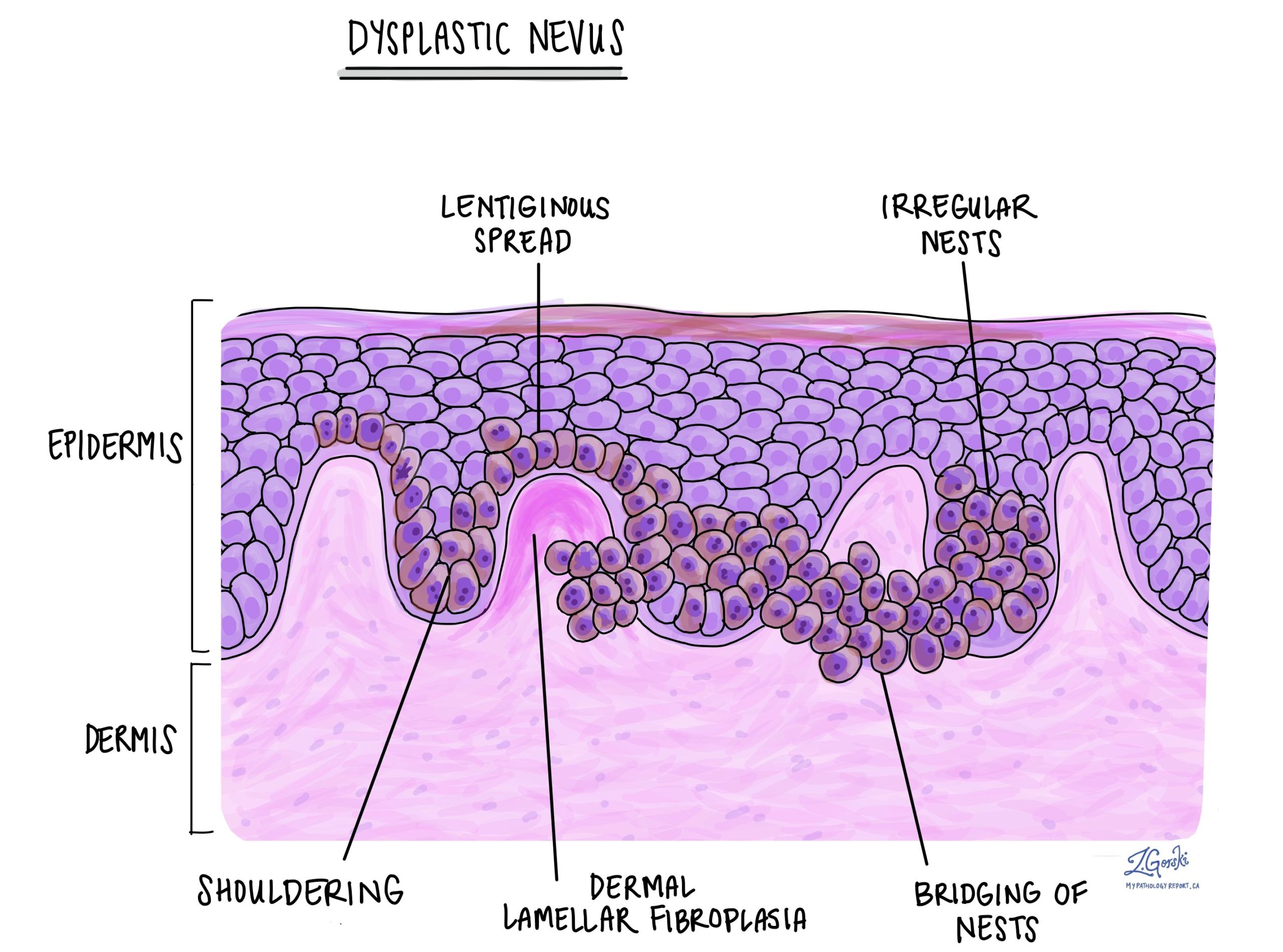 Cytology describes the look of the individual nevus cells which includes the body of the cell and the genetic material inside. At least some of these cytologic features will be found in order to make the diagnosis of dysplastic nevus:

Both the architectural and cytologic features will be given a grade which is a way of describing the difference between the nevus and normal, healthy melanocytes. Most pathologists divide the grade into three levels – mild, moderate, and severe. Some pathology reports will use the term high grade instead of severe. The grade is important because the risk of developing cancer is greater if severe or high grade features are seen.