Radial scar of the breast

What is a radial scar?

A radial scar is a non-cancerous growth that develops in the breast when there is an increase in the number of glands and ducts surrounding an area of altered connective tissue called a scar. Although non-cancerous, it is associated with a small increased risk of developing breast cancer when compared to women without radial scars.

The adult female breast is composed of small structures called glands that are arranged into groups called lobules. The main function of these lobules is to produce milk. The milk travels from the lobules to the nipple through small tubes called ducts. The lobules and ducts are lined by specialized cells called epithelial cells. 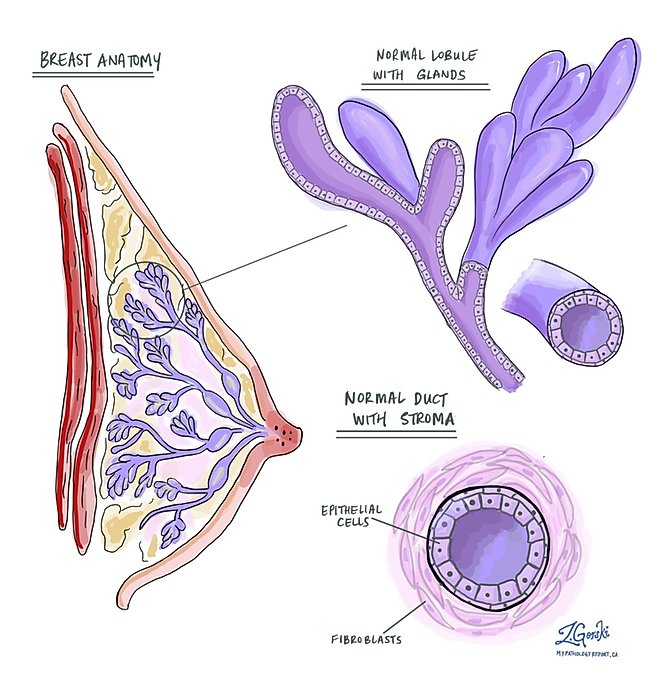 For many patients, a radial scar is discovered incidentally after a biopsy or resection is performed for another reason. However, some can be seen on screening mammography or ultrasound, especially when they are greater than 1 cm in size. Because a radial scar can look very similar to breast cancer on mammography or ultrasound, a biopsy is performed to confirm the diagnosis.

When examined under the microscope, the ducts in a radial scar have more epithelial cells than normal ducts which pathologists describe as usual ductal hyperplasia. There are also large ducts called cysts. Pathologists call the combination of an increased number of epithelial cells and cysts proliferative change.